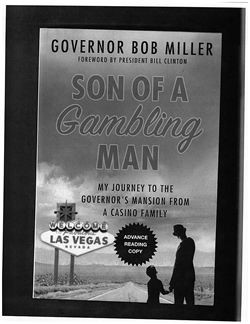 Testimonials of my new book “Son of a Gambling Man”

“Bob’s story is the perfect example of the “American Dream” and how much one can accomplish by putting their mind and heart into it.  I know aside of Bob Miller that many do not; the outspoken District Attorney – fighting for victim’s, children’s and women’s rights, the popular and longest serving Nevada Governor – who changed multiple laws to make Nevada safer for all citizens and the outstanding husband and father.  This memorable story is a source of inspiration for all who aspire to great.   John Walsh, Host of America’s Most Wanted

“Governor Miller has unique insight into the forces that have contributed to the growth and vitality of Las Vegas over the last half century. After reading “Son of a Gambling Man,” it’s obvious why and how he became such a dedicated and efficient public servant.”

“Fascinating, larger-than-life story populated with eye-opening, colorful characters. This is an inspiring story as well from a first-rate family man and statesman; a unique and memorable memoir.”

“Governor Bob Miller’s book “Son of a Gambling Man” is an incredible read and says what so many have been unable to say…those men and women who helped create one of the greatest cities in the world were at some point in time considered ‘outlaws’ and then ‘heroes’.  Thank you Bob for this insight only you could offer. You are truly a man of your word and one of the best Governor’s our state has ever had. I am proud to have been able to call you a friend for most of my life.”  Wayne Newton

The candid account of how the son of a casino owner who consorted with Chicago gangsters found his way into Nevada state politics and into the Governors mansion.

Chicago native Miller was just 10 years old when his illegal bookmaker father got the opportunity to run “a legal(but posh) gambling resort in…Las Vegas.” The Sin City of the 1950s bore no resemblance to the sprawling metropolis it would become: “Las Vegas spread out like boiling water on a flat surface, the streets almost swallowed by the desert.” Here, Miller ‘s father was able to remake himself into a highly respected casino businessman and pillar of the community. After studying law, a profession his father had once dreamed of pursuing, the author began working in the field of law enforcement. Eventually, he ran for and was elected Clark County district attorney, but not without running into the shadow of his fathers colorful past. In an attempt to discredit him, his opponent had suggested that Miller could never be “an impartial county prosecutor if[he] was the son of someone in the gaming business,” especially someone who had dealt with former mobsters. This would not be the last time Miller would encounter this kind of prejudice. Throughout the remainder of a political career that would ultimately lead him to the Nevada Governors mansion, Miller successfully staved off attacks against both his character, as well as that of his father. He never apologizes for what his father was, nor does he attempt to play down his fathers activities. Rather, Miller celebrates having grown up “the son of a gambling man” and having had the chance to serve a state that gave that gambling man the chance at a better life.

A refreshingly unpretentious statement of personal history and political accomplishment that avoids the pitfall of excessive self-congratulation.

Miller, Nevada’s longest-serving governor (1989 to 1999),opens this book by saying that it is not a typical autobiography. After a capable foreword by former President Bill Clinton, Miller writes lovingly, and without apology, about his father, a Chicago bookmaker, whose word was his bond. He counted mobsters as associates, leading to business opportunities in the pre-glitter Las Vegas era. The fledgling gambling mecca, Las Vegas, plays an important character here, as Miller’s father becomes deeply involved in the casino life, yet shields his son from it, instead urging him to take part in the American Dream. After a stint in the service and law school, Miller rises quickly from assistant district attorney to judge, entering public office and eventually becoming governor, where he boldly takes on the gaming industry and corrupt lawmakers. In addition to providing the basis for a revealing family memoir and a triumphant political document, Miller’s unique life is a testament to persistence, ambition, and respect for blood ties, including ties to his proud casino father. (Mar 2013)